-A testament to commitment, goals and faith 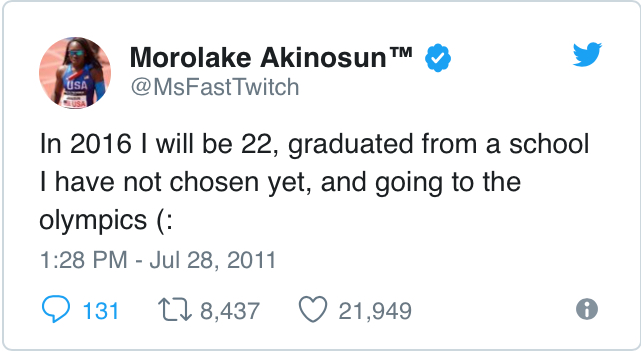 3 Phases – @15 – 20 min. each.  Each small group will have the opportunity to work HANDS ON with Morolake aka @msfasttwitch

Athletes 11 – 18 years will be divided into three groups

Refreshments will be provided.

Road To Rio – And Beyond

-Transferred to U. of Texas Longhorns

-At first disqualified due to dropped baton but officials looked at the replay and Brazilian runner got out of her zone and bumped Allyson Felix. Ran again solo & qualified 1st place with 41.77 sec.

Akinosun was part of the gold medal winning 400 meter relay team with Tianna bartoletta, Allyson Felix, and English Gardner. She was replaced by tori bowie in the final after having run twice in the qualifying races.